Chris Dixon's top tips for Monday: Prince can be King at Wolverhampton

With the scheduled card at Catterick already abandoned and the action at Plumpton hinging on a morning inspection, I am focussing on the all-weather meeting at Wolverhampton for all of Monday’s selections.

Having shown promise on her last two starts in novice company, Sound Mixer has progressed steadily to finish second on both handicap outings and still has more to offer.

Her recent improvement has taken place, despite being kept to sprint distances, on both handicap runs which is a surprise given her pedigree and the way she has shaped.

I’m expecting her to improve further as she steps back up to seven furlongs for the first time since her debut.

Double Kodiac hasn’t had a clear run at regular racing since making a winning debut in France as a two-year-old but has some very strong form to his name and drops into the lowest grade of competition he’s ever faced.

He has the profile of a horse who hasn’t been easy to train, but he did make a winning debut as a two-year-old in a race that worked out well and has since shown good form in better races when fresh of a break.

With that in mind and his stable in decent form, he’s expected to be ready to show his form and he’s not going to be bumping into the calibre of rivals he’s been beaten by previously as he takes on a much more exposed bunch.

Tony Carroll’s horses tend to improve plenty for their first start following a break, so it’s testament to how much he had in hand that Beau Geste defied a 146-day break when making a winning start for the yard here in December.

Back-to-back victories from the runner-up, Maqboola, have since advertised that form and although Beau Geste wasn’t able to build on that win with another victory next time out, he did go very close at Kempton and shaped better than the bare result that day.

That form has also stood up since with the winner, Deleyll, who had dropped to a good mark following up next time, and the third horse, Muraaqeb, also hitting the target on his next start, so Beau Geste still appeals as a well-handicapped horse having only been nudged up 1lb since.

Jorvik Prince did exactly what lots of horses do upon joining the care of Mick Appleby as he bolted up on his first start for the yard at Chelmsford.

That was a weak race, but he did clock a good time in relation to his mark and though subsequently beaten back at the same track on Friday, he now races off a 6lb higher mark than for that defeat, so he remains of interest.

The step up to six furlongs last time probably wasn’t ideal and a drop back to the minimum distance here is a plus, but a bigger factor in his defeat was the overly strong pace he set.

With a little less pressure on the lead this time, he shouldn’t have to work so hard early, while the application of a hood could do something for him.

Want to get your hands on a free Racing TV hat and scarf? Click here for more details! 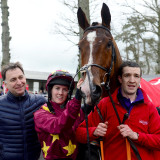