I’m looking forward to making the trip up to Musselburgh for an afternoon with Gordon Brown on Racing TV duty on Monday, so I’ve focussed entirely on that card for the day’s selections.

I won’t be matching the outstanding work of Andy Stephens who produced an unbelievable raft of winners for followers of The Score on Saturday but hopefully there is a profit to be made from four small fancies.

Keep The River has not fired in a couple of starts this season but she was consistent for a fairly long period last season and if she were able to return to that sort of form she would have a decent chance of making an impact.

The application of cheekpieces could help revive her, while the 6lb claim of her rider is a useful one against fellow conditionals.

Espoir De Loire has not built on his winning handicap debut at Warwick in March on two subsequent outings but I’m hoping a break and switch to fences sees him get back to form.

His defeat of No Getaway at Warwick makes him look well-treated off a mark of 114 and there’s reason to believe he may improve for going over fences.

The winner of an Irish Point-to-Point on his only start in that sphere, he got the better of the now 144-rated Champagne Mystery there and was only ever marking time while hurdling.

Fitness has to be taken on trust and Ben Pauling’s horses have been quiet for a while and that’s a worry for his chance but if he’s at the top of his game he’d have an excellent chance of making the long journey north pay off.

Theclockisticking has not won for more than a year and is yet to score in handicap company.

However, that time has been spent contesting much tougher races than the one he lines up in here and a reproduction of his best form in those deeper races should be enough to win off a sliding handicap mark.

His latest hurdles run at Kempton came over a trip too short and the step back up in distance here is a big plus, as is the booking of in-form conditional jockey Ben Jones, who looks excellent value for his 5lb allowance.

Eagle Ridge has struggled over the past couple of seasons but there was plenty of encouragement to be taken from his reappearance third here last month and it’s hoped he can build on that promise.

Having looked the winner for much of the straight he was caught on the run from the last that day but might well have needed the outing and based on that run his current mark is a workable one.

Stepped up in trip here, he’s unproven over this far but did place over 3m in an Irish Point-to-Point and there’s enough in his pedigree to offer encouragement for the extra distance. 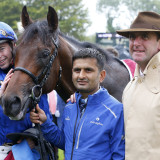 The European Classifications: Peerless Pinatubo in a league of his own
Honeysuckle heads strong Dublin Racing Festival squad for Henry de Bromhead 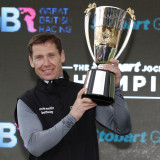