Roger Charlton is no rush to decide on the next plan of attack for Quadrilateral after a sinus problem was found following her latest appearance at Royal Ascot.

The daughter of Frankel was considered a major Classic contender after rounding off an unbeaten juvenile campaign with a top-level triumph in the Fillies’ Mile at Newmarket in October.

She had to make do with minor honours when favourite for the 1000 Guineas in early June, but was far from disgraced in finishing third behind last Saturday’s brilliant Oaks winner Love.

Quadrilateral again performed well in defeat to finish third in the Coronation Stakes at Royal Ascot, although Charlton is now wondering whether a minor problem hindered her on the day.

He said: “She had a small sinus issue in her nose, which was not ideal. We have got that cleared up and whether that affected her at Royal Ascot, nobody knows.

“There are no firm plans for her at the moment. When she does run next, I’m not sure if we will stay at a mile or change her trip.” 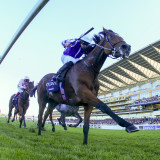