Jane Chapple-Hyam could not conceal her delight after Saffron Beach had finished runner-up in the QIPCO 1000 Guineas at Newmarket on Sunday.

The Newmarket trainer is hugely respected among her peers but has never trained anything more significant than a Group Three winner. A near-miss in one of the season's most prestigious races gave her a huge thrill.

"Can you just say that again, that sounded good!" she said to Racing TV's Tom Stanley after he had begun his interview with her by saying Saffron Beach had finished second in the Guineas.

“What can I say? Aidan O’Brien is just a genius," she added. "He is hard to take on and I can’t wait for him to retire!

“It would have been the quickest ground she has been on but she can handle it as she is versatile as you saw in the Oh So Sharp on good to soft and she has done it here on the quicker ground. We are just all thrilled and I’m sure the owners are highly delighted as they have got a second in the 1000 Guineas.

“This time last year she wasn’t even in training. She has seen the mile out 100 per cent. I knew she would get the mile and I know she will get a mile and a quarter as well."

As regard future targets, she said: “They (owners Ben and Ollie Sangster and James Wigan) will tell me where to send her and I will just get her fit. There is a good one in her. We just have to place her properly now and we will see what the team wants to do.”

Richard Fahey, trainer of the third Fev Rover, said: “I was pleased enough but Paul (Hanagan, jockey) just felt the ground was quick enough but she is grand. I was just worried there would be no pace on which I was right so I put the cheekpieces on but I’m not saying she will always have them on.

“She is in the Irish 1000 Guineas so we will have a look at that but we will step her up at some stage. It was a big run but visually they didn’t seem go that quick and instead just went an even gallop.

“For a filly that will step up that mile on quick ground was sharp enough but I’m delighted. She is a smart filly and I love her to bits. She is a big filly and hopefully she will come forward. I’m sure she will pop up in a big one at some point.”

Jockey Paul Hanagan added: “She really tried and I think she will improve a lot for that run as it was her first run back. I couldn’t be more pleased. I think first time back at the racecourse a big open track like this I thought the cheekpieces would just help her.”

Oisin Murphy, who was aboard 5-2 joint favourite Alcohol Free (fifth), said: “She had a nice trip and she followed Billy Lee on Thunder Beauty and Adam Kirby on Saffron Beach and I thought she had every chance.

“It was a good race and well done to the winner. It wasn’t that she didn’t stay. They all finished in a line the first five. Take nothing away from her performance.”

Tom Marquand, rider of Sacred (seventh), said: “The race developed and fell like I thought it would but she was just a bit keen and when we hit that rising ground we had burned up any reserves for that final furlong.

“She has got a beautiful cruising speed and they just weren’t taking her along quite quick enough to be in that sort of natural comfort zone of hers. They were just going that stride slower.

“I think everyone was unsure of the trip as she hadn’t tried it before. It depends what races and targets connections have now. Ultimately she is a really nice filly and she will be mixing it with the best of them.” 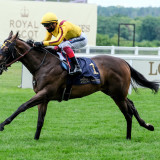 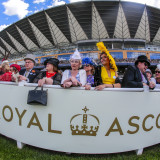 Juvenile Watch at Royal Ascot: Soft ground switch can pay off for Eve Lodge
News Articles
Heavy rain changes going to soft at Ascot as Primo Bacio is ruled out of Coronation