Trainer Ralph Beckett admits it would be “great for the sport” and in a “different league” to all of his previous big-race victories if Westover could carry the famous Juddmonte silks to Classic glory in the Cazoo Derby at Epsom Downs on Saturday.

The iconic colours of the late Prince Khalid Abdullah have been borne by a number of high-profile horses over a number of decades, and most notably in recent years by the great Frankel and brilliant racemare Enable, who tasted success at Epsom Downs in the 2017 Oaks.

Westover is a son of Frankel and, after a winning return to action in the Group Three bet365 Classic Trial at Sandown Park last month, now has the chance to become the fourth horse following Quest For Fame (1990), Commander In Chief (1993) and Workforce (2010) to strike gold for Juddmonte in the world’s most famous Flat race.

While Beckett is excited about being involved in this year’s Cazoo Derby, which will be run in memory of nine-time winner of the race Lester Piggott, the Kimpton Down handler is well aware of the significance it means to be representing Juddmonte on the big stage.

He said: “I think the Derby means more to any European trainer more than any other Flat race so inevitably I’m looking forward to it.

“Do I feel different compared to the other races? I suppose I do but as long as we get our ducks in a row for the rest of this week and in the preliminaries, all will be good.

“It’s a big gig for all concerned, not least because he is a Juddmonte horse, and that means a lot to us. It means a significant amount to me.

“We have been lucky for them and had a couple of Royal Ascot winners but this would be in a whole different league.

“I hope it would mean plenty to the sport as a whole apart from anything else. His (Prince Khalid’s) influence on the breed and the sport worldwide is huge as Juddmonte’s tentacles stretch far and wide.”

Westover marked himself out as a potential Classic contender when making a winning debut at Sandown Park last August before filling the runner-up slot on his next two starts in a conditions contest at Newbury and a Listed event at Pontefract.

Despite Westover tasting defeat after making a triumphant introduction Beckett, who has tasted Cazoo Oaks glory on two occasions with Look Here in 2008 and Talent in 2013, was far from disappointed with either of those efforts.

He said: “We sort of fancied him a bit that day at Sandown on his debut and I was convinced he would win the Haynes, Hanson and Clark event at Newbury.

“He didn’t leave me frustrated that day at Newbury as he is a big horse that was only going to get better.

“I thought about running him in the Zetland Stakes as I was pretty sure he would stay but I didn’t think running him over a straight 10 furlongs was a pretty good idea given how he had gone at Newbury.

“I felt going back around a bend even if he got beat was a better idea. He only got done on the line by a horse (Mr Professor) that had already had a good few starts.

“His full-brother (Fabilis) improved with racing and I suspect this horse will get better as the year goes on.”

Having acquitted himself well on his latest start and in a recent spin on Cazoo Derby Gallops Morning at Epsom Downs, Beckett believes Westover is ready to tackle the unique test of the prestigious mile and a half Classic contest.

He added: “He learnt plenty that day at Pontefract and I think that came out at Sandown. He is the sort of horse that comes out in the morning and everything is brilliant. You could see that in his race there.

“He looked good on the gallops morning at Epsom. I liked the way he went around there and how he came up the rising ground.

“I think he will go around there as he is a well-balanced athletic horse. He is quite experienced for a horse who has only had four starts.

“Once he has done things once everything is good and I suspect as he has gone to Epsom he will know what to do.

“He is not a worrier and he doesn’t stress. You would think this trip would be fine for him.

“There is an element (about him getting the trip) in his pedigree as Monarch’s Glen (another full-brother) didn’t get it but we can only go on what we know and his other brother (Fabilis) got it well. He is ready for it.”

The partnership between horse and jockey is an important one and Beckett feels that in Rob Hornby he has the right rider in place to do the steering on Westover at the weekend.

He said: “Rob is very laid back and he is not a man that lets anything get to him. I think he is ideally suited to the horse. He has got very good hands and he is very much a horseman.

“As regards to temperament, he has got the right one for the big occasion and that is important.

“He is a quiet rider but he is very effective and that has worked well for both us.

“I made a conscious decision at the start of 2020 that we would use the guys that were coming in. Westover won his maiden with Rob up and it has gone from there.”

Not only is Beckett looking forward to the occasion but so is groom Chun Lee, who insists he knew from an early stage that Westover had a touch of star quality about him.

Lee said: “I rode him as a two year and the first feeling was wow he has got some gears underneath him.

“You didn’t have to ask him he goes to challenge others as if to say bring it on let’s see what you have got. He always gave me a good feeling.

“At two years old I thought if everything went right he could end up in a race like this.

“After he won the Classic Trial I was a bit nervous but now I’m just excited about it all.”

Now in his third spell with Beckett, Lee, who originates from Hong Kong, admits whatever the result at the weekend it will be the undoubted highlight of his career.

He added: “It is my privilege and pleasure to look after a horse like him. This is definitely the highlight of my career so far.

“He loves attention. He is a nice big strong horse but he is very straightforward to look after. 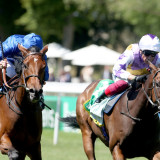 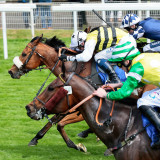 Paddy's Pick 5: Our tips at York on Wednesday for the £10,000 game
Betslip
JoinLogin
DepositLogout