Brant Dunshea "incredibly confident" that racing will resume on June 1

Brant Dunshea, chief regulatory officer at the British Horseracing Authority, expressed his confidence on Racing TV on Sunday that racing will be able to resume in Britain on June 1.

Racing was last staged on March 17 and the Government announced earlier this month that no professional sport, even behind closed doors, would take place before June 1 at the earliest.

The BHA on Saturday published its protocols for resuming behind closed doors at Newcastle on that date, and Dunshea said it had been recognised that racing differed in its make-up from sports such as football and rugby.

Culture Secretary Oliver Dowden suggested at the beginning of the week a return for top-flight football could be “mid-June at the earliest”, but Dunshea told Racing TV’s Luck On Sunday programme: “I think what we have got to understand is that all the way through this process in our engagement with Government it has been recognised that we are different to the other sports that are being referred to.

“We are largely a rural-based sport, we are an outdoor environment – both our training and racing environments are outdoor and pose lower level of risk and position us as a very different sport to football and rugby, for example.

“I’m very, very comfortable that our sport is being seen as a different sport to other contact sports by Government, and I’m sure in the broader context of that comment it was focusing more on the contact sports rather than sports such as racing.

“It’s been recognised by Government at a number of levels that we are different and we appreciate that, because we have been advocating all the way through that we have our own unique circumstances which shape our sport.”

“We are working hard and planning towards June 1 being our resumption date and we are all very excited about that.” 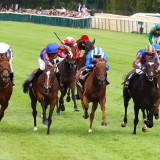