James Fanshawe’s Breeders’ Cup winner Audarya could start her season in the Group Two Prix Corrida at Saint-Cloud next week.

The mare was Fanshawe’s first ever runner at the hugely valuable American meeting, and provided the trainer with a thrilling Group One success when landing the Maker’s Mark Breeders’ Cup Filly & Mare Turf by a neck at 12-1.

The November performance was the last time Audarya was seen on the track, but Saint-Cloud may become the scene of her seasonal comeback as she holds an entry for the Prix Corrida on May 26.

“She’s in good form and I’m hoping to start her off next week, she’s got a couple of options.

“She’s in the Prix Corrida at Saint-Cloud and she has a couple of other entries as well.”

Those entries include the Prince of Wales’s Stakes at Royal Ascot and the Pretty Polly Stakes at the Curragh, with Fanshawe keen to navigate the earlier stages of the season before considering a return to the Breeders’ Cup in November.

“We’ll get the short-term targets out of the way first and then make a plan after that, we need to get her first run done and then we’ll know more about where to go next,” he said.

Audarya ran impressively on French soil twice last year when winning the Prix Jean Romanet and finishing third in the Prix de l’Opera, and Fanshawe is not ruling out crossing the channel again later in the season

“The race next week is for fillies and mares only and the conditions are good,” he said.

“There are good races across the country, but we’ll get this one out of the way first.”

Also under consideration is the option of moving the mare out of the company of her own sex and testing her against the colts, as illustrated by her entries in the Prince of Wales’s and the Coral-Eclipse.

“She’s won two Group One races against her own sex,” Fanshawe said.

“So we’ll see how we get on and see whether we can take on the colts at some stage.”

Pyledriver in great heart with sights set on King George 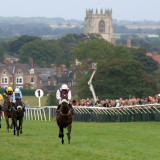 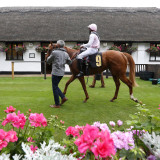