Charlie Appleby will split his two smart juveniles up this weekend, with La Barrosa set to run in the Criterium International in France while One Ruler stays closer to home for the Vertem Futurity Trophy at Doncaster.

La Barrosa has won both his races to date, on debut at Ascot and then as an odds-on favourite in the Group Three Tattersalls Stakes at Newmarket.

Both of those were over seven furlongs and he will step up to a mile at Saint-Cloud.

The Doncaster race is also over a mile, with One Ruler is among the ante-post favourites.

A close third to New Mandate, who has subsequently franked the form in Group Two company, on his penultimate outing, the son of Dubawi was last seen winning the Autumn Stakes in good style.

Appleby said of One Ruler: “As we saw, stepping up to the mile for the first saw further improvement.

“He has come out of the race well. We had it in the back of our minds to look at the Vertem Futurity Trophy with him and he has done very well the last 10 days. We are pleased to let him take part on Saturday.”

"He'll be sorely missed," says Charlie Appleby on the retirement of Ghaiyyath.

He went on: “La Barrosa won the Tattersalls Stakes, which turned into a little tactical affair but he got the job done. He has come out of it well.

“We know that as he is by Lope De Vega he will like the soft ground. He is likely to head to France at this stage for the Criterium International, which looks a small field but a competitive field.” 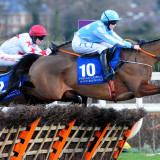