Racing TV viewers are in for some terrific action over jumps and on the Flat in Britain and Ireland on Sunday. I’ve got four selections spread between Kempton, Naas and Cork, with my best bet coming at the last-named racecourse.

Paul Nicholls has a 32 per cent strike rate this season and the suspicion is that he has a tremendously strong team for this jumps season.

This is reflected in his odds to win the National Hunt Trainers’ Championship, as he is the 8-11 favourite.

Another winner beckons here in the shape of Fidelio Vallis. He was tremendously impressive when winning two Class 4 Novice hurdles earlier this year. Encouragingly, one of those victories came here at Kempton and that win was gained in taking style. He went with zest through the race and showed a taking turn of foot to settle things quickly. He is a smart prospect who will take a lot of beating.

I am keen on Nicholls completing a quick fire double here, albeit none us know what this horse actually achieved when thrashing two horses at Ludlow last time out.

He won by 53 lengths in a race that he dominated from flag fall. It must have been a trick race for the BHA assessor to rationalise, and the decision to leave his mark unchanged at 132 may prove to be generous.

This is clearly a much tougher test, but I think he will be suited by the sharp nature of this track given the speed that he has always showed over hurdles and fences. He is no one-trick pony in terms of his run style as he can make the running, but he has also run well when he has been dropped in. There will be a sound gallop here courtesy of the free-going Locker Room Talk and he should give Darling Maltaix a nice lead into the race. At about 3-1 he rates as a decent bet.

Dance Jupiter heads the weights for this handicap and has a class edge that is allied to the considerable talents of Dylan Browne McMonagle, whose 5lb claim is an absolute gift. He is a fully fledged jockey in the guise of an apprentice.

Dance Jupiter has finished third in the two handicaps he has competed in and in both he had absolutely no luck in running.

He would certainly have gone close to winning last time out if he had not been checked repeatedly. He steps up to 10 furlongs here, which looks sure to suit, and the forecast soft ground poses no threat. Indeed, he won on similar ground at Cork earlier this season when beating the useful Patrick Sarsfield.

He is usually held up in his races and I expect the same here under his brilliant young rider. This horse rates as my best bet of the day.

Unbeaten in three starts over fences in 2018, this mare has clearly had a problem, but after a 23-month absence she returned at Kilbeggan in September with a really good effort in being narrowly defeated by Visioman.

She went like the best horse in the race that day, jumping well and asserting between the last two fences, but she tied up after the last and was collared close home.

She might have been committed too soon by her 7lb claimer, but nonetheless it was a very good effort off a lay–off. She has gone up 4lb for that effort and has been given time to recover.

Rachael Blackmore takes over in the saddle and trainer Henry De Bromhead has a tremendous record with his chasers. Abbey Magic can resume winning ways. 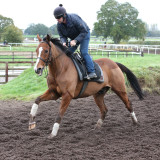