Sea La Rosa’s class came to the fore in the Qatar Lillie Langtry Stakes as Tom Marquand timed his challenge to perfection aboard William Haggas’ filly.

Jason Hart blew any pre-race tactics to smithereens when he set off on an enterprising ride aboard eventual second Urban Artist.

Hughie Morrison’s seven-year-old was over a dozen lengths clear of the chasing pair of Sea La Rosa and Yesyes when breaching the highest part of the track and starting the run for home.

However, Urban Artist’s stride began to shorten inside the last two furlongs and it was Marquand who had saved the most petrol to pounce in the closing stages and score at 9-4 by a length.

Urban Artist gallantly shaded the battle for second, while 13-8 favourite Emily Dickinson, who was held up out the back by Ryan Moore, was unable to make up enough ground despite flying home for third.

Maureen Haggas, wife of winning trainer William, said: "Sea La Rosa is a lovely improving filly - she's as tough as old boots. The first race she won at Haydock this year, she pulled his [Tom Marquand's] arms out and still won. Today was a weird race, but she's tough and she seemed to stay well. As soon as she hits the front, she stops so you have to get her there on the line. It was a pretty stern test and she will know she's had a race.

"It's hard to tell how good she could be because she's still improving, and now she's won a Group Two race there's only one place to go. She's not very big, but if she could win a Group One it would be fantastic. For any of these fillies that is what you are trying to do. She gives everything and she's very admirable. She is in the Irish St Leger, but that is William's department. He will talk to the owners and work out what to do. She seems to like this ground, most Sea The Stars do."

Marquand said: “It was a tough one because we know Urban Artist stays very well and yet you never know quite how much a horse in front has left. This filly gives you great confidence on the way round because she travels so strongly and you know she is going to grit it out. It was just a case of trying to pick her up at the right time.

"When you have one loose on the front end, you have to time it so your horse is catching it, but with not enough time for the others to use you as a second wave. It's a hard one, but watching the Tour de France in the past week has probably helped me with that – except we didn't have a lead-out man.

"I was worried about where Ryan [Moore] was on Emily Dickinson. I knew I had the two in front of me covered, but my worry was Ryan was stalking me. I was concerned about getting there too soon and Ryan would swing over the top on Aidan's filly, who had the three-year-old allowance. There's a lot going through your head on the way round.

"Sea La Rosa stays really well and I'm sure William [Haggas] will have targets in mind for her. I see no reason why not [make a challenge for the Irish St Leger], although I'm sure William will find a reason why not. He calls it my youthful optimism, so I'll leave that to him. He's the master of finding races."

Jason Hart said of Urban Artist: “Hughie [Morrison] left it to me. He said she stays very well, so make it a test. She has done it within herself – she was pricking her ears the whole way round. I thought coming inside the last furlong that I was going to hang on and she kept galloping to the line. She is Group Two-placed now, which is really important for her.” 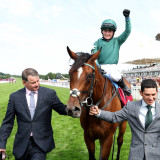 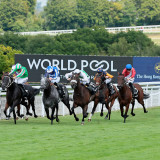