The Big Breakaway will head straight to the Cheltenham Festival, with connections deciding to swerve the Bateaux London Reynoldstown Novices’ Chase at Ascot.

Colin Tizzard’s youngster had first been pencilled in for the Towton at Wetherby two weeks ago – but when that meeting was lost to the weather he was rerouted to Ascot’s Grade Two on Saturday.

However, with the ground set to be testing, it was felt he would be better heading directly to the Brown Advisory Novices’ Chase at next month’s Festival.

“If it had been slightly better ground we’d have run.

“We’re just wary of three miles on soft to heavy ground, and we didn’t fancy it.

“We got three runs into him in the first half of the season – and not running this weekend gives the option of going to Cheltenham, Aintree, and we could even think about Punchestown.

“Had we run this weekend it might have left a mark, and we wouldn’t have been able to think about all three, so we’re giving him a chance.”

Were The Big Breakaway to have run this weekend, Robbie Power would have travelled from Ireland to ride him again – following another change in the rulings concerning jockeys moving between the two countries.

“Robbie can come over for Graded days, so he’s over for Lostintranslation for the Denman (at Newbury on Sunday), and he would have been over on Saturday if we needed him,” added Tizzard.

“It changes a fair bit, Robbie knows what is what, though, so I just ring him and ask if he can come – and he tells me yes or no.

“Obviously it’s nice to have Robbie, but Jonjo (O’Neill) and Harry (Cobden) would have slotted in for the rides anyway.” 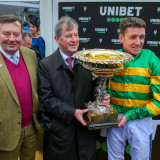 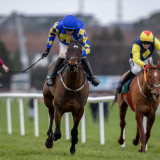