Ruby Walsh admitted on Racing TV's Road To Cheltenham show that he “loved everything that Jonbon did” when the exciting youngster made a successful hurdling debut on day one of the Ladbrokes Winter Carnival at Newbury.

The five-year-old, who is as full-brother to Douvan and won his sole point-to-point start by 15 lengths before winning a bumper at Newbury in March, is the most expensive point-to-pointer ever sold at a public auction having been purchased by JP McManus for £570,000 at Goffs November P2P Sale last year.

Discussing the performance with fellow Road To Cheltenham presenter Lydia Hislop, Walsh explained what made Jonbon’s performance so impressive in what was a messy race where none of the contenders wanted to make the running, and it took just over 50 seconds after the tape went up before the runners broke into a canter.

“I thought he was really good. I was really taken with him, and loved everything he did,” Walsh said.

“Obviously, it was a messy start, and it’s usually something you say about a race in Ireland, but this was a really impressive maiden hurdle performance.

“No one wanted to go on, and it was a slowly run race. Jonbon eventually took over going to the third hurdle, which he jumped really well, and he jumped his way to the front.

“I thought he was really good at the fourth, he was nimble and quick with his feet at the fifth and, turning into the straight to the third-last hurdle, he came out of Aidan Coleman’s hands, and showed great scope.

“He always looked in control of this race, and never looked in any danger. Good Risk At All (who finished runner-up) is a fair horse, and Jonbon has made him look a lot less superior.”

Jonbon is now a best-priced 7-2 for the Sky Bet Supreme Novices’ Hurdle at next year's Cheltenham Festival, a race Douvan won in 2015 before winning the Arkle the following year, and ahead of this week's Road To Cheltenham show, a poll was posted on Racing TV's Twitter account asking 'Which novice hurdler excites you most right now?'.

Jonbon and Statuaire, who won the Grade One Royal Bond Novice Hurdle on her return to action in November, were two of the options, with the third option being 'Other (Please comment)', and Jonbon dominated the poll scoring almost 80 per cent of the 2200-plus votes.

'Roadies', as Lydia likes to call Road To Cheltenham viewers, replied with some questions and observations to the tweet, including the two below.

“I think he will find plenty (off the bridle),” Walsh said when discussing the two replies with Hislop.

“Klassical Dream is one novice, that I can think of, that was quite messy in the prelims, that managed to go on and win the Supreme Novices’ Hurdle.

“I think Jonbon will improve with age. He got quite worked up at the Newbury gallops morning and I watched him go to post (ahead of this race) and I loved the way he went down to post. He was so professional - his ears were pricked and there was no ducking or diving.

“I think he’s a professional racehorse that just has a bit of bounce to him, more so than anything.

Hislop agreed with Walsh’s comments and said that Nicky Henderson has described Jonbon as a “bit of a fidget”, and Hislop believes he’s a horse who is “growing up in front of our eyes.”

“He’s a full-brother to Douvan and I think he’s got that bit of pep about him that good horses tend to have,” Hislop added.

“Good word!” Walsh replied with a smile on his face. 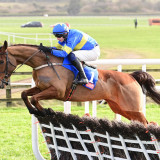