Website tipster Harry Allwood has taken an early look at Cheltenham's International Meeting and picks out three bets for Friday and Saturday.

Plan Of Attack was an eyecatcher at Cheltenham’s November meeting where he stayed on strongly into fourth on his first attempt over the cross country course, and a repeat of that effort should see him go close again here.

Although the nine-year-old did appear to struggle over some of the unique obstacles on that occasion, I am taking the view that he can only improve for the experience, and the outing as it was his first start for 105 days.

It was also his first try over 3m6f and, having been outpaced turning for home, he began to stay on after the last and proved he stays the marathon trip.

Any rain that falls should be an advantage to him as the quicker conditions last time out may have been one of the reasons he struggled to go with the leaders when the pace quickened plus he has produced some of his career-best efforts with dig in the ground.

While he has not proved the most consistent over the past couple of seasons, he has shown on numerous occasions that he is capable of winning off his rating and has some decent handicap form next to his name, including when fourth in the 2020 Kim Muir at the Cheltenham Festival (he was also travelling well in this year’s renewal when falling three out).

At a best-priced 6-1, he is worth chancing for the all-conquering Henry de Bromhaed team who are also represented by Grand National runner-up Balko Des Flos.

Similar to Plan Of Attack, Dostal Phil was an eyecatcher at Cheltenham’s November meeting having finished a staying-on fourth behind Midnight Shadow in the Paddy Power Gold Cup where he got outpaced at a crucial stage of the 2m4f contest.

That was his first completed start over the trip and good ground was against him on that occasion as he has shown his best form with cut in the ground – he has won three times on soft and heavy ground - and any rain that falls will improve his chances here.

The stiffer track on the New Course at Cheltenham is also expected to suit him better than the Old Course he ran over last month, and he has only been raised a 1lb for his exertions there.

Philip Hobbs’ eight-year-old was a gradual improver last season and the form of his effort in a valuable handicap at Aintree – where he finished third behind Editeur Du Gite and Sully D’Oc AA – has worked out well. He was also beginning to make ground when unseating his rider five out in a race won by Asterion Forlonge at the Punchestown Festival on his final start last season.

He is also entitled to strip fitter for his run in the Paddy Power and makes plenty of appeal at 7-1, despite this being a fiercely competitive contest.

This improving mare produced a smart performance when successful in a Listed contest over course and distance in April, the form of which has been franked, and she had previously stayed on from an unpromising position to finish eighth in the Mares’ Novices’ Hurdle.

Her jumping was far from polished at the Cheltenham Festival which resulted in her losing ground throughout the contest, but she jumped with much more fluency when upped in trip next time out, and again on her two starts this season over this distance.

She fared creditably against stiff opposition on her latest outing at Aintree and will certainly find this grade an easier assignment plus she has won twice on soft ground in the past.

Although she remains on a career-high rating – which is 8lb above her last winning mark – she has only had ten starts and is improving, so it will be a shade disappointing if she is in the grip of the handicapper already.

Indefatigable will be a danger if she lines up, but disappointed last time out and needs to bounce back. 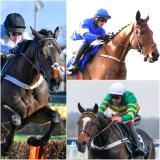 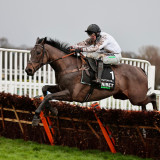 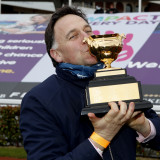