Tom Thurgood picks out seven horses who caught the eye in defeat in the handicap races at the Cheltenham Festival.

Paul Nicholls has a good record in this race and, in what was a quiet Festival for the champion trainer, this juvenile ranks as the foremost performer for Ditcheat at Cheltenham.

The Boodles lacked pace and was dominated by those towards the head of affairs, with Bell Ex One coming from further back than the winner Brazil and runner-up Gaelic Warrior and ran a cracker on British debut to justify the pre-race optimism of rider Harry Cobden.

In the hood and a little too keen than ideal in the first half of the race, he looked to be outpaced as the leaders kicked on down the hill and was sixth turning in but found generously and was only beaten 1½ lengths at the line, clearly finishing with more to give.

Usually, Nicholls has pitched his horses that have run well in this race into top-level company at Aintree subsequently. Bell Ex One is owned by an Australian and will head back there to run on the Flat shortly, so the trainer is likely to choose his final target carefully with this talented four-year-old.

Philip Hobbs sent a select team to this year’s Festival, but the vast majority of his small team of handicappers ran well and Camprond was arguably the unluckiest of the lot given the ground went completely against him on the Wednesday.

He wants decent conditions and after heavy rain on watered ground the going was officially soft with only a handful of prominent racers ever holding a genuine chance. Camprond was beaten 10½ lengths but shaped better than that margin suggests, quickly tiring on the approach to the final flight as the ground took its toll.

His mark of 140 is unlikely to change much and he could have another bid at the Swinton Hurdle in May on better ground. Before that, the Grade Three handicap hurdle over 2m4f at Aintree looks another suitable target given he’s run well at the Grand National meeting before. Judging by recent runnings, his current rating would give him a very feasible racing weight of around 11st for that contest.

Watch the remarkable effort from Frero Banbou in the Grand Annual

Venetia Williams enjoyed a remarkable Festival and Frero Banbou put up an extraordinary performance in the Grand Annual – and might well won in most unlikely circumstances.

Placed right out the back early on and jumping a little ponderously, he warmed to his task and made up ground efficiently despite his position under a good ride but he’s worth marking up given he made his challenge down the inside when the winners on Wednesday seemed better advantaged coming up the middle and towards the stands-side.

Also, the pace held up well in the race with winner Global Citizen dominating along with Editeur Du Gite, who jumped the last in second but finished fourth. Runner-up Andy Dufresne was up there the whole way too. Frero Banbou was there at the finish despite his position and spectacularly blundering the final fence.

Before this race, Frero Banbou was only 4lbs higher than when fourth at Aintree in the Red Rum last season – and he’s a better horse now who has improved for more patient tactics. The long straight should give him plenty of time to get into contention and he should hold a leading chance there.

While only 4-1 for the race – just behind 7-2F and eventual runner-up Imperial Alcazar – Celebre D’Allen ran well here and shaped like a well-handicapped horse.

Waited with in three previous wins at Haydock and Warwick, the New Course at Cheltenham may not have suited him ideally on a track where the pace usually holds up over fences. Just in recent years, Siruh Du Lac (2019) made virtually all in this race while Simply The Betts (2020) was prominent throughout. The Shunter (2021) and this year’s winner Coole Cody also led at various stages.

Celebre D’Allen didn’t jump as well as he can in the early stages but stayed on well and might have finished closer, while he is lightly-raced for his age and has more to offer.

Always very keen in his younger days, he notably demolished one of the open ditches at Sandown on his previous start by jumping on top of it in the Scilly Isles Novices’ Chase.

Mister Coffey had some questions to conclusively answer despite the market support for this first try at an extended three miles and he ran a fine race, looking the winner turning into the straight. While he ran well and got the trip, he was ultimately beaten by a stronger stayer over three miles and two furlongs.

He ran well for fourth at Aintree last year in handicap hurdle form that reads well (Dans Le Vent in second and Edwardstone in third) and the handicap chase over three miles and a furlong – on better ground – appeals as a more suitable stamina test. Unexposed at staying trips, he shouldn’t be too long in winning.

A Grade One winner who held a big reputation in his bumper days, the wheels looked like falling off this season but this was a huge step back in the right direction after finishing to excellent effect for fifth.

Ballyadam picked up really well inside the final few furlongs and may have been disadvantaged a little by making his challenge on the inside in comparison to winner State Man, third Colonel Mustard and fourth West Cork while his mark – which had fallen 4lbs this term – is unlikely to be changed much given the first seven home here were all officially rated within 5lbs of each other.

While he has to build on this, his days of competing at Grade One level over hurdles may not be behind him yet, while the Galway Hurdle appeals as big-race target in the summer with a return to chasing surely off the table now.

He produced one of the most eye-catching finishing efforts of the week.

Very badly hampered after jumping the second, he looked all at sea coming down the hill and only had three rivals behind him but picked up to fine effect and weaved in and out of the field in front of him to pass 11 rivals in the straight for defeat by less than seven lengths.

Despite his big odds here, he was reportedly struck into when only 3/1 for the Grade Two Leamington Novices’ Hurdle at Warwick previously while he was running a big race in the Challow Hurdle when falling at the second-last.

This was his first try in a big-field handicap and given the way he shaped he could show decent improvement for this initial experience. 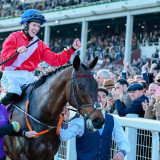 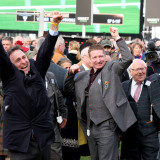