Find out about the origins of the track where the turf meets the surf, and what attributes are required to win at this year's Breeders' Cup course.

Where the turf meets the surf. Down at old Del Mar. Take a plane. Take a train. Take a car.

There is a smile on every face. And a winner in each race. Where the turf meets the surf. At Del Mar.

Bing Crosby’s ode to Del Mar is enjoying its 80th anniversary this year – click here to have a listen – and you can imagine the late Hollywood legend looking down at the imminent Breeders’ Cup contentedly with a clutch of betting tickets in one hand and a pair of binoculars in the other.

Crosby is best known for a multimedia career in which he starred in more 70 films and recorded more than 1600 songs but he also loved his horses. The racecourse he helped create in conjunction with other Hollywood high-rollers was quite a gamble and the vision almost required a movie script to build it.

Del Mar was, and still is, a small village on the south coast of California blessed with beaches, waves (it’s the first destination mentioned in Surfin USA by The Beach Boys) and almost wall-to-wall summer sunshine. Its population of about 4,000, similar to, say, a British seaside favourite in Lyme Regis, with no shortage of hotels and restaurants for tourists.

Crosby could see the potential of locating a racecourse by the sea. Back then, nobody was talking about climate change or the threat of rising oceans wiping out parts of the map.

Santa Anita Racecourse, opened in 1934 about 100 miles away, was quickly flourishing and so an inspired Crosby invested $600,000. “Where the turf meets the surf” was an immediate tag line, with the marketing men overlooking “where the dirt meets the Hawaiian shirt” for variety. They could have had that one, on me.

It was not an immediate winner after opening in the summer of 1937, but its anxious investors had a trick up their sleeves. The following year, Del Mar played host to a match between one of the sport’s most revered performers, Seabiscuit, and a rising star from Argentina, Ligaroti, who it was agreed would receive 15lb.

Lin Howard, who owned Ligaroti in partnership with Crosby, was the son of Charles S. Howard, the owner of Seabiscuit. The $25,000 winner-takes-all contest, spiced up by an alleged $15,000 side-bet, drew national attention and a crowd of more than 22,000.

The race itself, which Seabiscuit won by a whisker, was still making headlines days later after a ding-dong battle up the straight with both jockeys George Woolf (Seabiscuit) and Noel Richardson banned for all kinds of antics. The track announcer said: “That was as rough a race as I’ve ever seen in my whole life. They were hitting each other over the head with their whips and Richardson had Woolf in a leg-lock.”

How much was stage-managed – and whether cash actually changed hands - we will never know, but it served its purpose. Del Mar was now firmly on the map and soon everyone wanted a piece of the action there. Build The Racecourse And They Will Come. And they did. In tens of thousands. Crosby would sell his share in it eight years later, apparently taking 15 minutes to record an annual winner White Christmas in the interim.

Fast forward to the present day and the 38th Breeders’ Cup will cap a week-long festival that includes a poker tournament, golf competition and numerous parties where there will be cocktails at every turn.

For those attending the races, there is something for every budget. Basic admission starts at $50 but those with thicker wallets will pay $11,250 to secure a six-seater table in the elevated restaurants that provide spectacular views of the racecourse and beyond.

What will the winners require?

The Del Mar turf track is sharp in nature, plus the ground is almost guaranteed to be quick. The sweeping dirt track is on its outside.

A low draw is favourable on both, but not if you dawdle at the start. An inviting open door can quickly be slammed in your face. Those drawn wide have the opportunity to get on terms early on, but their jockeys have to be careful not to ask for too much, too soon. Something has to be saved for that final stretch.

A swift start and decent early position in the 14-runner fields is pivotal, including over a mile where there are two turns and a home stretch of less than two furlongs.

Frankie Dettori gave his verdict after racing there for the first time in 2017, shortly before the Breeders’ Cup action got under way. "You do not want to be drawn high, anything above seven on the turf track you really have little chance.

"You cannot get yourself into a decent position unless you are up with the pace, because the winning the post is almost just over a furlong from the entrance to the straight. You cannot make up three lengths in that distance.”

Rushing Fall promptly proved Dettori wrong by winning the Juvenile Fillies’ Turf from stall 11, while Rhododendron (14) almost landed the Filly And Mare Turf, and Beach Patrol (11) went down by only half a length in the Breeders’ Cup Turf. The winners on the dirt included Battle Of Midway (9) in the Mile plus Caledonia Road (12) in the Juvenile Fillies’.

In fact, since Del Mar installed a new turf course, in 2016, there has been no great marked advantage in stall position, perhaps with the exception of 9f races, where the stats point to a low draw being favourable.

More important is the ablity to be able to lie up near the pace, or stalk it. So you can win from a high draw, provided you have the right horse.

European challengers fared pretty well four years ago, with Mendelssohn (Juvenile Turf), Wuheida (Filly And Mare Turf) and Talismanic (Breeders’ Cup Turf) all successful. Several other raiders were placed, while Aidan O’Brien and Charlie Appleby were responsible for the first two home in a non-Breeders’ Cup race over 5f for two-year-olds at the same meeting.

Del Mar lends itself to tight, competitive racing where jockeys and horses have to be nimble and think on their feet. Much like the surfers five minutes away, it’s a case of eyeing the right opportunity and then riding the wave for all your worth. Just as Crosby and his pals imagined it always would be. 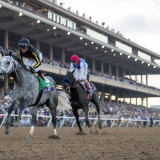 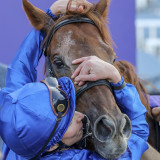 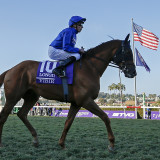 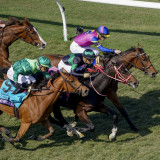